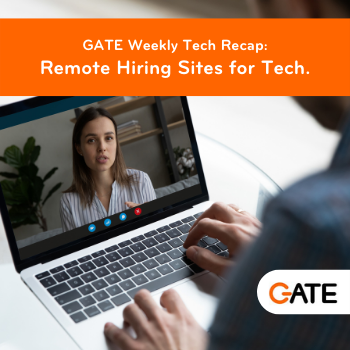 Remote hiring sites are not easy to find. This is especially the case for I.T and software engineering positions.

Working from home and becoming a digital nomad are becoming increasingly popular options for people who are fed up with the traditional 9-5 office jobs. There are many compelling reasons to work from home.

In our Tech Recap this week, we look at remote hiring sites for tech and a surprising tracking deal.

Top 7 Remote Hiring & Hiring Sites for IT and Software Engineers

According to global workplace analytics, 5 million people in the United States are working from home at least half of the week.

Also, more than one in three professional occupations in North America will be done from home by the end of 2022, according to some estimates.

As a result of the freedom afforded by their profession, IT and software engineers were among the first professions to have the option of working from home during the pandemic.

Take a look at these top remote hiring sites for IT and Software Engineers.

DuckDuckGo’s reputation for protecting privacy has taken a hit after revelations emerged of a tracking deal with Microsoft.

While the browser blocks Facebook and Google trackers, DuckDuckGo makes an exception for Microsoft.

For more on this story, read here.

When it comes to hiring slowdowns among social-media giants, Meta/Facebook and Twitter now have company.

Snap CEO Evan Spiegel just announced his company would slow hiring through the end of the year to manage its budgets.

Snap hired 2,000 employees over the past year, and intends to bring another 500 onboard before the end of 2022.

According to CNBC – pressures facing the company include inflation, supply-chain issues, and aggressive privacy controls on Apple’s iPhone. This could result in significant declines in both revenue and adjusted earnings for the current quarter.

Network engineers are tasked with building out and maintaining an organization’s network.

It’s an incredibly important job, and a complex one: When a single wrong move can cascade into a network-crashing disaster, an engineer must always be diligent and detail-oriented.

Given that pressure, it’s probably a good thing that a network engineer salary can climb to an extraordinarily high level.

But how high? Let’s look at the data from a couple of sources, and see what factors go into a typical network engineer salary.

What is a network engineer starting salary? Read here to find out more.