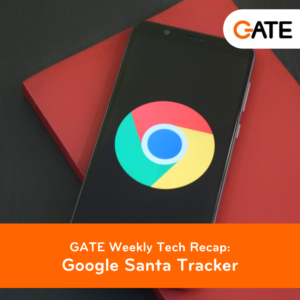 It’s holiday season and tech is yet again to make our lives easier. Every year since its launch in 2004, Google developers have made sure anyone with internet access can find out where Santa is on his toy delivery route using the Google Santa Tracker. This year, the team behind the tracker is giving users an additional surprise… and some behind-the-scenes information.

For this week’s tech recap, we look at the Google Santa Tracker, AI tool to detect fakes, Google cancels from CES, and a New Tech Role.

If you type “Where is Santa?” directly into the Google search bar, you’re shown a rather adorable animated short featuring some mischievous penguins and the Claus’ secret closet. After the short ends, you’ll see a couple suggestions for mini-games or other videos. But if you scroll down below the landing page, you’ll find the full gamut of available interactions – many of which helped other Google innovations later come to be.

The Santa Tracker originally launched in Dec. 2004, and has been continuously updated by Google’s team ever since. It’s gotten big features, like new coding games and voice assistant integration, and small ones, like a mask for Santa to protect himself and others during the pandemic.

And according to the official Google blog, the developers behind each update have found that working on the Santa Tracker is not only a fun holiday tradition, but useful for overall Google service development, too.

You may want to keep this handy for next Christmas!

AI spots Deepfakes by analyzing light reflections in the eyes:

A new AI tool provides a surprisingly simple way of spotting them: looking at the light reflected in the eyes.

The system was created by computer scientists from the University at Buffalo. In tests on portrait-style photos, the tool was 94% effective at detecting Deepfake images.

Thursday started with big news from Lenovo, followed by Waymo and Intel. Now it seems that Google is extracting itself entirely from its in-person presence at CES.

CES is an annual trade show organized by the Consumer Technology Association. Held in January at the Las Vegas Convention Center in Winchester, Nevada, United States, the event typically hosts presentations of new products and technologies in the consumer electronics industry.

A spokesperson for the company told TechCrunch:

“After careful consideration we have decided to withhold from having a presence on the show floor of CES 2022. We’ve been closely monitoring the development of the Omicron variant and have decided that this is the best choice for the health and safety of our teams. We will continue to collaborate closely with both CTA and our partners to identify and support virtual opportunities, and we look forward to sharing the latest Google innovations with you all.”

The SFHC Admin will be primarily focused on making improvements to an existing, dynamic Salesforce Health Cloud implementation at a growing national healthcare firm.  There is already a team of SF experts working on this instance. The current team of consultants includes Salesforce Architects, Developers, a Team Lead, and SF Admins.

In this role, the SFHC Admin will become our “in-house” expert, learning the system inside and out, participating in conversations about enhancements, implementing enhancements, and keeping our system in overall good health.