Home/Blog, tech recap/Bitcoin Evolution: Where is it going?
Previous Next 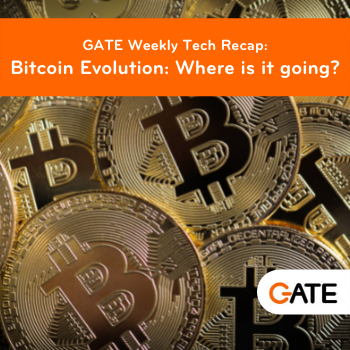 Bitcoin was developed more than a decade ago as “digital gold,” a long-term store of value that would resist broader economic trends and provide a hedge against inflation.

Today, Bitcoin is taking another direction.

In our recap this week, we look at where Bitcoin is going and attracting Gen Z.

We also unpack A.I and the human brain, as well as the Tech unemployment rate.

Bitcoin- is it another tech stock?

Bitcoin is a cryptocurrency, a virtual currency designed to act as money and a form of payment outside the control of any one person, group, or entity.

This form of cryptocurrency removes the need for third-party involvement in financial transactions. It is rewarded to blockchain miners for the work done to verify transactions and can be purchased on several exchanges.

The virtual currency’s crashing price over the past month shows that vision is a long way from reality.

Instead, traders are increasingly treating the cryptocurrency like just another speculative tech investment.

Attracting and Retaining the New “IT” Generation.

A new generation of trend setters has joined the working environment and things are changing.

According to Monster Worldwide – 46% of college grads go to YouTube/TikTok for advice, while 30% of non-college seekers use the platforms for their actual job search.

So, how can organizations work better to attract and retain the new “it” generation?

Merging the Human Brain and Computers.

Why are we on the verge of creating a technology that will combine the computer with the human nervous system into a single complex?

How will a person change after connecting with an electronic machine? Can a computer system handle the flood of data from billions of living neurons?

Individual artificial intelligence as a bioelectronic hybrid will have fundamental advantages over both the biological brain and any computer system.

We also talked about some technical features of a new type of brain-computer interface.

What will happen to all of us? Who will we become in the end? Read here for more.

The unemployment rate for tech occupations hit 1.7 percent in April, according to a new CompTIA analysis of U.S. Bureau of Labor Statistics (BLS) data.

The latest unemployment rate is also a healthy reminder that, even though some famous companies might be instituting hiring freezes or pay cuts in response to business slowdowns, many organizations continue to hire aggressively.