AI in food, healthcare and more. 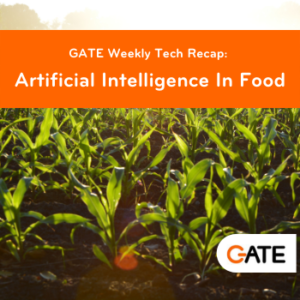 It is encouraging today to see how far the technology used in A.I improves how we work, eat or live.

For our tech recap this week, we look at AI in food, Google in healthcare, Apple updates, and VW Tech Updates.

Risks of Using AI To Grow Our Food:

Artificial intelligence (AI) is close to driving an agricultural revolution and helping confront the challenge of feeding our growing global population in a sustainable way.

What are researchers saying about this?

Researchers have warned that using new AI technologies at scale holds huge risks that are not being considered.

A new risk analysis, published recently in the journal Nature Machine Intelligence, warns that the future use of artificial intelligence in agriculture comes with enough potential risks for farms, farmers, and food security that are poorly understood and under-appreciated.

What does that mean for the development of AI in the agricultural sector? Read here for more.

New Google Feature Could Help You Make a Doctor’s Appointment:

Google is now trying to make booking a doctor’s appointment a little easier with a new Search feature.

This feature will show appointment availability for select providers.

This new Google feature is one of the developments the tech company unveiled at its second annual health event, ‘The Check Up’. (You can watch it here.)

Though the new feature is still in its early stages, Google plans to roll it out soon across the US for select providers at first.

After iOS 15.4 was launched on March 15, many users reported surprising battery drain problems with their iPhones, which is admittedly an issue that arises frequently for new iOS updates. What doesn’t happen every day, is that Apple has weighed in.

Read here to learn more about what this means for your battery life.

VW introduced improvements to the infotainment system and others.

The Wolfsburg-based automaker is now launching an even more significant software update.

The first cars to receive the software updates will be the ones that are being produced currently, but later in the year, the software will be provided to cars that have already been delivered.

For more information about the highlights of the new software, read here.

Cloud engineer vs. data engineer: Which is better?

If you work in IT, you’re likely to have heard of cloud and data engineering positions.

Data is critical for businesses, but so is moving to the cloud and putting apps in place.

The question of cloud engineering versus data engineering is one that many people have on their minds.

in this post, we to try to address the issue of cloud vs data engineering.