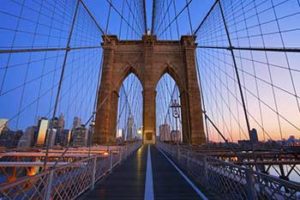 Brooklyn is well-known for many things; the Brooklyn Bridge, Fort Greene and once being the home of Walt Whitman, Leonard Bernstein, and Mae West. But these days Brooklyn has a new claim to fame—technology! Brooklyn had 1205 technology startups in 2018 vs. only 264 in 2008, a growth of 356% over the decade, second only to San Francisco.

Downtown Brooklyn, Industry City, DUMBO (Down Under the Manhattan Bridge Overpass) and the Brooklyn Navy Yard form the Brooklyn Tech Triangle, which includes New Lab, a tech ecosystem that provides space for technology startups to grow.

Even more exciting, according to the June 2019 report from the Center for an Urban Future employment in Brooklyn’s tech sector increased by 175% between 2007 and 2017, compared to 86% growth in that same period in Manhattan. If you are looking for employment in the tech space, Brooklyn is absolutely on the rise and looks like the place to be!

“Companies like Etsy, Rent-the-Runway and United Technologies know the Brooklyn vibe and lifestyle is a major selling point for talent,” said Alexandria Sica, Executive Director, Dumbo Improvement District. “This report makes it all the more obvious that this is a place that adds value for innovative companies”.

The highest concentration of start-ups is in media entertainment, e-commerce, financial services, and data analytics. But several emerging fields including payments, AI, blockchain and virtual reality have also seen significant growth over the last few years.

The influx of young, educated new residents helped create this plethora of startups. Getting a start-up off the ground requires more than just technical skills. Education programs now focus on business skills that entrepreneurs need for success.

“Brooklyn has become a hub for innovation and growth, attracting and growing companies at the cutting edge of their industries,” said Regina Myer, president of the Downtown Brooklyn Partnership. “the borough serves as a model for cities around the world. This report clearly demonstrates that New York City is no longer a synonym for Manhattan — Brooklyn is on the map.”

Clearly Brooklyn is the place to be for technology startups, growth, and employment. In fact, according to MarketWatch after saying ‘no’ to Queens, Amazon may be considering up to one million square feet in Brooklyn!

GATE is excited to be part of the technology boom in Brooklyn. Let us help you find your next opportunity where you can stand out. Send us an email or call us at 877-369-GATE.